Sri Lanka police is using draconian anti terror laws to arrest youth involved in political activities and others suspected of petty crimes, creating a climate of fear in the Tamil majority north, says a Jaffna based think tank.

In a report released on the recent Terrorist Investigation Department (TID) crack down in the Jaffna peninsula on a suspected criminal gang, Adayalam Centre for Policy Research (ACPR) has expressed its concern over dozens of arrests of young Tamils under the Prevention of Terrorism Act(PTA).

While the government publicly claim that arrests in the North are made in connection with a criminal gang, ACPR highlights the fact that police later produces the suspects in courts for alleged efforts in re organising the LTTE (Tamil Tigers).

The Minister of Law and Order Sagala Ratnayake announced in Parliament on 16 November that a total of 38 individuals from identified 62 have been arrested for their alleged connection to a group of criminals publicly known as the 'AAVA' gang. 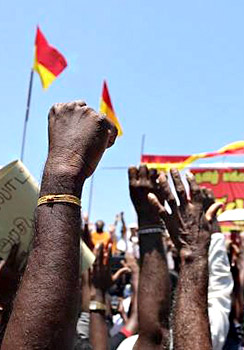 Although the house was informed that those arrested were not terror suspects, "Minister Sagala Ratnayake however did not explain as to why many of those arrests were then made under the PTA," says the Adayalam Centre.

"The statement by the Minister that the Aava gang was not involved in terrorist acts is in total contrast to the submissions made by the Police and the TID before the Colombo Additional Magistrate justifying the arrests under the PTA. The Police and TID in court claimed that those arrested are connected with former LTTE cadres and that they are trying to regroup."

ACPR fears that the attempt to link a suspected criminal gang with the Tamil Tigers is an extension of justifying the arrest of Tamils under terror laws by the deposed Rajapaksa regime.

Many of the arrested youth " are actually young Tamil political activists, some of whom were involved in the organization of the Ezhuka Tamil rally," says the Adayalam Centre report.

Expressing the view of Tamils living in a militarised environment, ACPR suspects that the 'AAVA' gang was called to action by the military intelligence to suppress democratic Tamil mass movements, especially in the run-up to the annual Tamil war heroes day ' Maveerar Naal' celebrations due to take place in the last week of November. 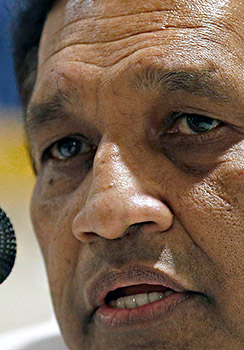 sence of a criminal gang, could be  "used by the military in the North to crackdown on Tamil activism and mobilization by creating a climate of fear that is conveniently timed for the lead-up to Maveerar Naal, which annually sees a more visible military presence in the North-East," warns ACPR.

Killing of Sulaxan and Kajan

It draws attention to the fact that the AAVA gang suddenly surfaced after Jaffna undergraduates mobilized the north against the police killing two of their fellow students, Wijayaraja Sulaxan and Nadarasa Kajan.

"The alleged resurgence of the Aava gang at a time when security apparatuses are facing closer scrutiny from the international community due to the killings of Sulakshan and Kajan, when mobilization of Tamils in the North is growing, and when pressure is mounting on the government to demilitarize the North-East, is perceived by many in Jaffna to be orchestrated by military intelligence. People have long had suspicions about the Aava gang and its links to military intelligence, especially given its ability to operate with impunity at the height of the Rajapaksa regime."

Sri Lanka government spokesman Rajitha Senaratne had earlier said that the AAVA gang is a paramilitary group formed and armed by the country's defence establishment during the civil war.

The Adayaalam Centre for Policy Research urges the government to put an end to the use of the PTA to address gang violence in Jaffna and to  table in Parliament a coherent statement as to the security sector’s alleged involvement in the creation of AAVA, its relationship with military intelligence and its continued use in the post-war context.

Tweet
More in this category: « A cabinet reshuffle after budget debate? US embassy empowers youth to improve local communities »
back to top

Suranga Lakmal out for the rest of the county season

Ready to take over as PM even today - Sajith

Public reminded to get appointment when applying for passports