No support from Vatican for nun abused by Bishop Featured

An Indian Catholic nun who  spoke out against a bishop accused of rape says she has been "denied justice" by the Vatican.

The Franciscan Clarist Congregation (FCC) has said Sister Lucy Kalappura was expelled on the grounds that her "lifestyle was in violation of the proper law" of the congregation. Sister Lucy, however, has said she was actually dismissed because she took a prominent role in the protests against the bishop in 2018.

She said she would not leave the convent and now plans to go to court.

He was later arrested over allegations he repeatedly raped a nun between 2014 and 2016. However, the bishop denies all the charges against him. 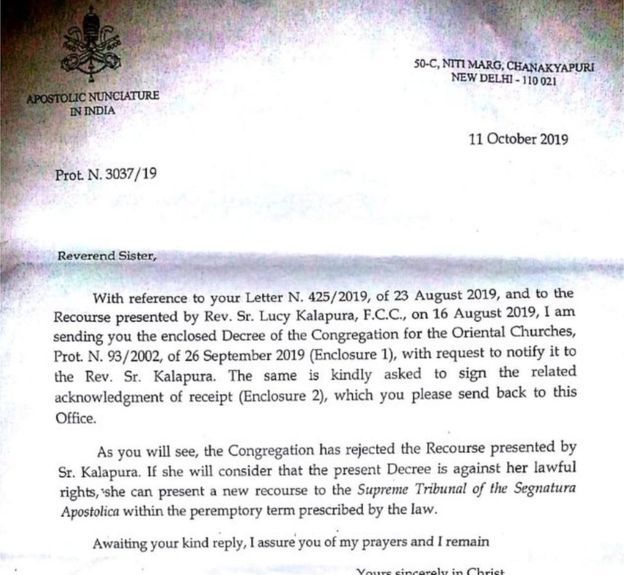 However, she claims that the real reason she was ousted was because Sister Lucy had taken an active role against the Bishop.

She told the BBC's Yogita Limaye that she was "not at all satisfied" with the Vatican's response. She alleges church officials did not even contact her to get her side of the story.

"I am not going to leave the convent. The lifestyle I lead is as per the rules and regulations," she added.

Although the letter she received from the Vatican says she could "present a new recourse" if she felt that the ruling was "against her lawful rights", she said she had no plans to appeal.

"I am allowed a second appeal but I don't see any point in doing that since they have made up their mind. I will now go to court on behalf of all the people who are being suppressed and facing illegal behaviour from authorities of the congregation," she told the BBC. 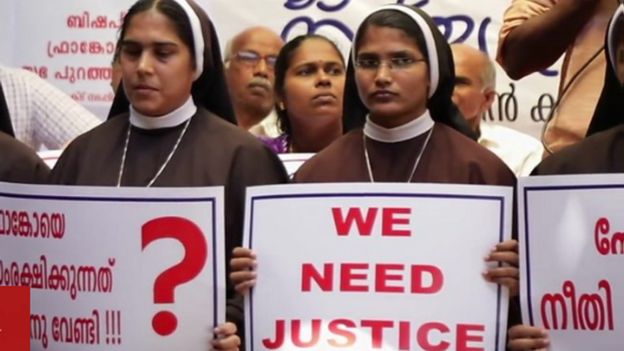 Other nuns who protested against the bishop Franco Mulakkal have accused the church in Kerala as well as Vatican officials of turning a blind eye towards the rape allegations.

They say they sent a letter to the Vatican's ambassador to India and even wrote to the Vatican but did not receive a response from either.

There have also been a number of punitive measures taken against the nuns who protested, including disciplinary warnings and transfer notices.

While testifying in a local court, one of them told the judge that the church was attempting to "sabotage" evidence in order to protect the bishop.

Tweet
More in this category: « Army Commander’s stand on Gota’s advertisement SLFP signs MoU with Gotabaya »
back to top

Covid 19 & Beyond - The impact on theLabour Market of Sri Lanka