In an unprecedented move, police in Sri Lanka, made use of an international agreement to imprison a multiple award-winning Sinhala writer for publishing a work of fiction on social media.

Shakthika Sathkumara was remanded until 9 April by a magistrate on Monday (01) in the northwestern town of Polgahawela, 75 kilometers north-east of Colombo. 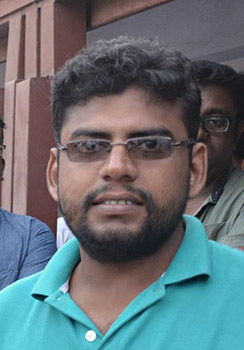 The writer was charged under ICCPR Act for writing a short story, which revolves around a Buddhist monk who renounced the saffron robe. The Act was enacted in 2007 to give effect to certain provisions of the United Nations multilateral treaty, International Covenant on Civil and Political Rights (ICCPR).

The ICCPR prohibits "advocacy of national, racial or religious hatred that constitutes incitement to discrimination, hostility or violence".

A magistrate in Sri Lanka is not authorised to grant bail to those charged under the ICCPR.

When 'Ardha' first appeared on facebook, a group of Buddhist monks stormed Shakthika Sathkumara's workplace demanding punitive action against him.

Bowing down to pressure, the Kurunegala District Secretariat had initiated a disciplinary inquiry against the writer who is a government employee.

'Will stand against attempts to release death row prisoners'