My mother grew up in a house of eight people in Kurunegala, Sri Lanka, 100km north-east of Colombo. During the island’s severe droughts in the 1970s, most of her family’s humble, home-cooked meals consisted of boiled jackfruit served in a clay pot with a handful of freshly grated coconut. This simple, carb-rich meal fused with natural fats fuelled enough energy for the farmer-family to toil day and night in the dry plains.

Today, Starbucks serves jackfruit in wraps, while Pizza Hut offers it as a topping. The London Evening Standard called jackfruit “the new kimchi, kale and cauliflower all rolled into one”. Pinterest named it “the hottest food trend of 2017”, and more recently, The Guardian declared it “a vegan sensation” thanks to its shredded meat texture. 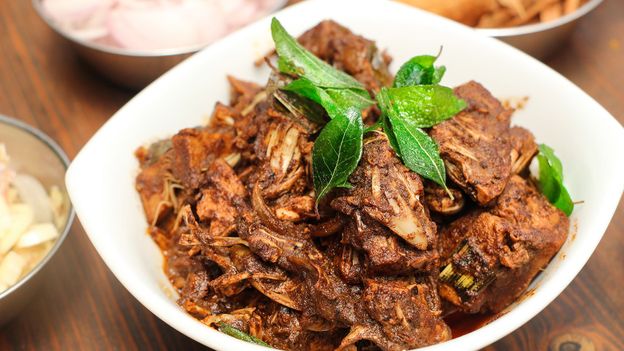 But for my mother, her memories of growing up are studded with her eldest sister’s myriad jackfruit dishes. She’s particularly fond of kiri kos, a creamy jackfruit curry cooked in coconut milk. For kiri kos, my aunt plucked unripe jackfruits. Decades later in the early 2000s, it was the same tree that pleased my jackfruit cravings as a child. My mother recalls the days where I sat side by side with her as she removed and discarded the sticky white sap – koholla, as she called it in Sinhala – from ripe jackfruit, gobbling up each yellow, egg-like pod.

I loved the strong smell of the ripe fruit. People in the West often describe it as “stinky”, but for me, other Sri Lankans and those living between many parts of India and the rainforests of Malaysia where the fruit naturally grows, this seasonal smell of ripe jackfruit brings immense joy.

Jackfruit is the world’s largest tree-borne fruit and it has a spiky skin that changes colour from green to yellow as it ripens. We use unripe jackfruit in our cooking and eat the ripe fruit raw, just as we eat a ripe mango or an apple. While the West is now touting it as an ethical meat alternative, for centuries, this humble fruit has been revered by Sri Lankans, as it has repeatedly saved the island from starvation. 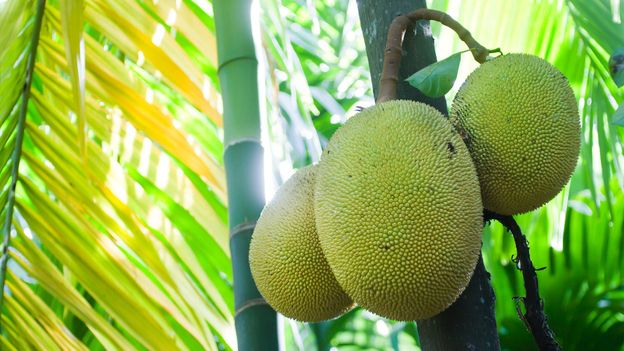 Across Sri Lanka, the jackfruit tree is known as bath gasa (“rice tree”). Sri Lankans are rice eaters and pre-colonial Sri Lanka took pride in the country’s vast reservoirs and irrigation canals that harnessed monsoon rains, suppling water for paddy cultivation. But when British forces occupied the island starting in 1815 and subsequently stripped farmers of their land, they made it difficult for islanders to grow rice and instead expanded plantation crops such as tea, rubber and cinnamon for their export gains.

In 1915, a member of Sri Lanka’s independence movement named Arthur V Dias, who had been sentenced to death by the British for his perceived role in an uprising, was freed from prison. Upon his release, Dias dedicated himself to helping Sri Lankans fight British rule and he realised that islanders would soon face food shortages as rice cultivation continued to decline. During his independence movement marches in Sri Lanka’s central highlands, he also saw the destruction of the island’s native jackfruit trees. When he learnt about the harrowing food shortages caused by World War One across Europe, Dias sought to establish food security and self-sufficiency throughout Sri Lanka.

“One person can’t build a tank for paddy cultivation, but Arthur V Dias realised he could plant jackfruit trees, which [would] be the same as rice and eradicate starvation in Sri Lanka,” said Damith Amarasinghe, a history teacher at St Mary's Maha Viduhala in the town of Uswetakeiyawa. 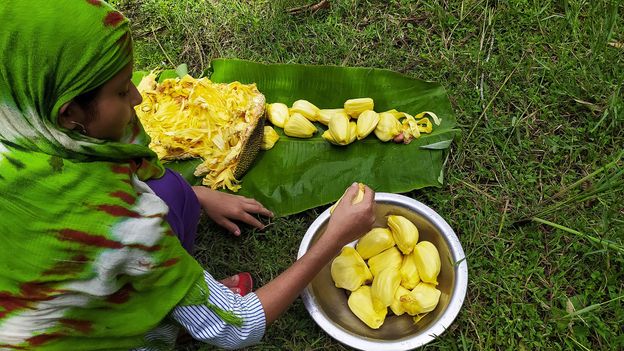 Today, jackfruit trees are everywhere in Sri Lanka and are a vital source of protein for local residents (Credit: Sahid Laskar)

Dias came up with the ambitious goal of planting one million jackfruit trees across Sri Lanka. A planter by trade, Dias imported jackfruit seeds from Malaysia and gathered healthy seeds for germination. He visited villages to distribute seedlings and mailed seeds to far-flung corners in the country. Over time, Dias’ campaign paved the way to many successful jackfruit plantations across the country and earned him the heroic nickname of Kos Mama, or Uncle Jack.

Today, Dias is considered a national hero, and like most Sri Lankan children, I first learned about Dias in a school textbook. His jackfruit campaign also helped establish food security in Sri Lanka during World War Two while nearby places such as Bengal and Vietnam experienced horrific famines in the 1940s. Amarasinghe explained that jackfruit was also known as the “starvation fruit” in Sri Lanka during the 1970s, fleetingly transferring me to my mother’s memories of her childhood.

In the 1970s, a combination of inflation, droughts and a food shortage pushed Sri Lanka to the verge of collapse. A 1974 New York Times article quotes Sri Lanka’s then-prime minister Sirimavo Bandaranaike as saying the dire economic situation has “almost squeezed the breath out of us – we are literally fighting to survive”.

But thanks to Dias’ campaign in the early 1900s, people had jackfruit growing in their backyards. Amarasinghe explained that those saplings – which had become tall, fruit-bearing trees long before the 1970s – are what got people through the crisis. 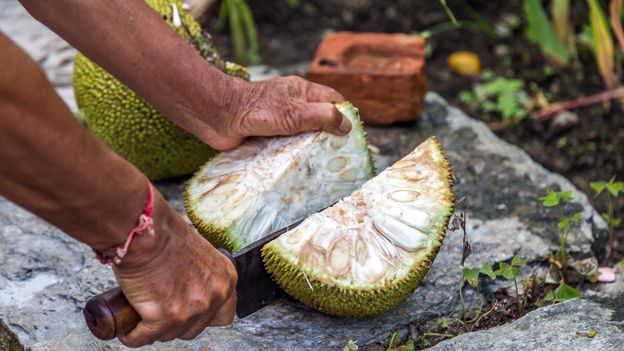 A mature jackfruit can weigh as much as 55kg (Credit: greenaperature/Getty Images)

“My grandmother hailed from a well-to-do family, but the government only allowed them to purchase 2kg of rice for a week. During these years, it’s jackfruit that kept them fed,” Amarasinghe told me.

Most recently, Amarasinghe says that jackfruit also became a staple during Sri Lanka’s months-long curfew to control Covid-19. During the initial weeks of the pandemic, many people in rural villages lost their incomes and it took weeks or even months for government welfare programmes to reach these remote hamlets. Without access to money or food, many villagers resorted to boiling jackfruit – just as my mother’s family did in the 1970s.

But jackfruit isn’t just a starvation fruit. The island’s deep love and gratitude for jackfruit has birthed a host of flavourful delicacies, and we welcome every bit of it into our diverse cuisine. Tender baby jackfruit without seeds go into a flavourful curry known as polos ambula. The curry’s labour-intensive process involves slow cooking the young fruit in a clay pot over an earthen fire for at least six hours. As the hours pass, the baby jackfruit slices simmer in a spice-infused coconut broth, soaking up the flavours of cloves, cardamom, dried tamarind and other aromats. 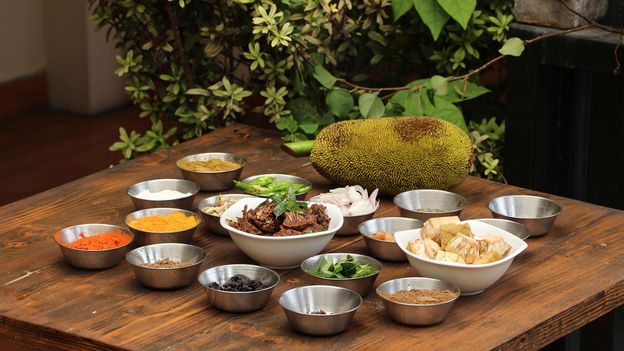 Ripe jackfruit pods are slimy and taste better with a sprinkle of salt. Seeds don’t go to waste in our homes; we eat them boiled. When combined with a ground mix of pan-fried rice and shredded coconut, boiled seeds make for a dark curry called kos ata kalu pol maluwa. My mother loves seeds as a snack, smoking them over a charcoal fire. My favourite is my father’s kos ata aggala, pan-roasted and ground jackfruit seeds blended with scraped coconut, sugar and a hint of pepper that are formed into balls for sublime taste and a subtle crunch. He makes them for evening tea when I’m home as a token of his love.

This jack-of-all-fruits’ versatility runs beyond the kitchen. “It’s hard to think of another tree with so many uses,” said Diwani Welitharage, a pharmacist who cooks with locally sourced ingredients in her spare time. Welitharage cites jackfruit trees’ popularity as timber and the many uses of its leaves and flowers in Ayurvedic medicine to treat diabetes. Rich in carbs, jackfruit is also a good source of dietary fibre and vitamin C. 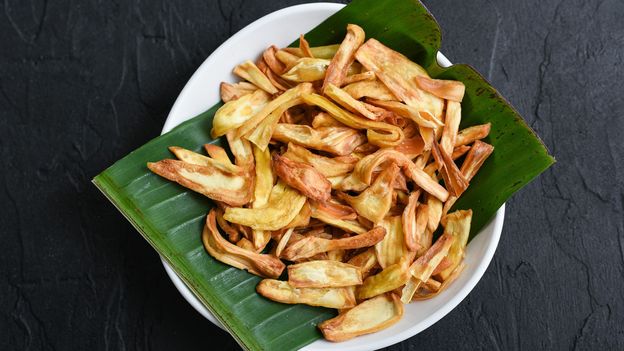 Jackfruit is often fried and made into crunchy chips as a snack (Credit: santhosh_varghese/Getty Images)

Though jackfruit is traditionally cooked at home, this humble fruit is increasingly found in many upscale restaurants across the country.

“One day we had additional baby jackfruit, so I thought of preparing cutlets [a croquette-like snack] with it for guests who are vegetarian or vegan,” said chef Wasantha Ranasinghe at Upali’s by Nawaloka, a popular restaurant in Colombo that serves authentic local dishes. His tender jackfruit cutlets, served with a homemade spicy chilli sauce, soon became a hit among the epicureans frequenting the restaurant.

Curious to see how jackfruit fares at hipster cafes, I visited the chic Colombo restaurant Cafe Kumbuk, which plates tacos with fried baby jackfruit alongside mango salsa and guacamole. “Living in Sri Lanka, I realised jackfruit is such a widely available, versatile fruit that can be cooked and enjoyed in so many ways,” said cafe founder Shana Dandeniya, who returned to Sri Lanka a few years ago after growing up in the UK. “To me, it’s one of the greatest local superfoods we have access to, and we should champion it more.” 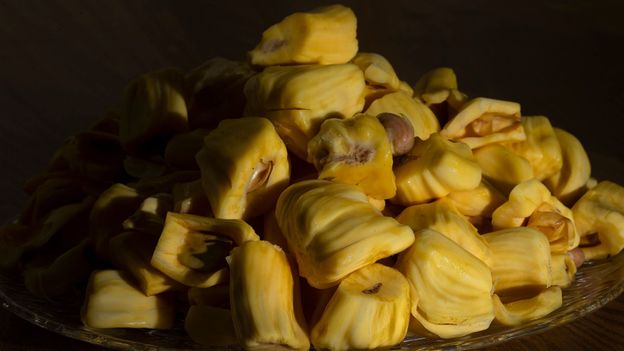 She is particularly fond of the pulled pork-like texture in cooked jackfruit and has plans to reintroduce a pulled jackfruit burger on the cafe’s menu following customer requests. “It’s great when slow-cooked and pulled; I think it’s even better than pulled pork.”

When I spoke to my mother again, she tempted me to visit my aunt in the village for a bowl of creamy white kiri kos cooked over a woodfire and enjoyed with a plate of hot rice and lemongrass-scented freshwater fish curry. I can’t recreate my aunt’s authentic flavours in my Colombo kitchen with a gas stove, but I can visit her and then see my father for a token of love that comes with his teatime kos ata aggala.

Clean the young jackfruit, and then peel and cut it into medium-sized chunks. Boil until soft, and mash.

Boil the potatoes, and then peel and mash them.

Heat the coconut oil in a shallow pan. Once the oil is hot, add onions, garlic cloves, green chilli, ginger, pepper, chilli flakes, roasted curry powder and chopped curry leaves. Sauté until onions turn tender and light golden in colour. Add salt, the mashed jackfruit, and potatoes and stir well for five minutes. Switch off the heat. Once cool, shape the mixture into small balls about 1.5in in diameter.

Prepare the batter by whisking together the wheat flour, water, turmeric and salt.

Dip the balls in the batter and roll them in breadcrumbs.

Heat a pan with oil and fry the cutlets until golden brown. Serve them with a spicy chilli sauce.

If you liked this story, sign up for the weekly bbc.com features newsletter called "The Essential List". A handpicked selection of stories from BBC Future, Culture, Worklife and Travel, delivered to your inbox every Friday.

Young woman killed in accident in Meemure as bus topples down precipice!

IGP orders those fighting at fuel stations to be videoed!