Two political personalities; wholly different from each other and different to all others as well, are in the limelight now. One is former State Minister and now Opposition MP Ranjan Ramanayake whose membership was suspended by the UNP leadership a few days ago, while the other is the controversial former Secretary to the Ministry of Defence Gotabaya Rajapaksa, the newly-elected President.

Obsessed in wiping out corruption, Ranjan has gone on a Wild West “Eastwood” tour sans ethics and limits, and has shot many others in their feet too.

President Gotabaya who vowed to discipline society and make Sri Lanka a prosperous modern country, is singularly trying to put things right as promised. That compelled someone to comment in social media “We voted for a President and got a ‘flying squad inspector’”.

This witty remark came after Gotabaya’s visit to the Werahera Motor Traffic Department, one month after assuming office as President. That was his second such unannounced visit to a State agency. This had more media coverage, especially in social media than the previous visit to the Narahenpita “Economic Centre”. His latest unannounced visit was to the BIA, Katunayake. This had a sarcastic FB comment posted that said it is not proper for Gotabaya to undermine PM Mahinda Rajapaksa’s stature by visiting the BIA on his own, when BIA comes under the PM and with two relatives recently appointed to the Director Board of Airport and Aviation (Services) Sri Lanka Ltd.

These comments though making fun, bring out a very important issue President Gotahaya should contemplate on, if he is serious about turning Sri Lanka into a disciplined modern country. There are two approaches in achieving what he promised. One is a strenuous and a very persuasive, social process. That needs an inclusive, far-reaching “development” programme, to begin with.

Then a strong political commitment and a leadership that can mobilise social participation at every level in creating a totally new working culture with new social attitudes and values. That needs close monitoring and regular engagements with professional and trade union organisations, social and community leaders. That also takes time and demands pragmatism within an evolving social process. Such participatory “development” holds people responsible for a disciplined society and is more sustainable. In turn it allows for widespread democratic development and improvement of all social and State structures.

Having avoided such democratic development, the Southern Sinhala Buddhist society keeps asking for a “strong” leader who could deliver on “discipline and efficiency” on a fast track. All that sounds like a school Principal going around the school with a cane in hand, “enforcing discipline”. That gives “discipline” a totally different definition. Controlling pupils with a cane is not about discipline.

Not about changing attitudes and values positively. Not about engaging teachers and parents as responsible for discipline in school. It is not about improvement of “pupil quality” but about coercing pupils to obey commands. That often gets explained after the Principal is transferred out and when parents say, “Now the school is ruined”. It had been “strict control” of pupils. But that is what People understand as “discipline”; a strong arm, command and obey.

Where does Ranjan Ramanayake fall in place in this modern but primitive Sri Lanka? Once into mainstream politics, Ranjan saw mega corruption all round him. He explained himself to journalists in his own simple language. “Bro, all of them are rogues. The society is a rogue society bro….see how many are running behind these candidates, spending money, transporting busloads for meetings, cheering their candidate? …. Why?

They need their man in power bro, to mine sand, get permits, import ethanol, peddle drugs and do all sorts of corrupt things bro.” He in his own way wanted to play “hero” by exposing the “corrupt” in a system that is horribly corrupt. Despite his mediocrity, his unethical manner in recording conversations on the phone without consent and his outdated method in storing them, in thousands they remained with him confidential and secret, till someone or some people somehow got access to them. The tapes were thereafter selectively released to the public domain. Even with doubts cast on the authenticity of voices, the exposed tapes have exploded into a “Ranjagate”, exposing a crude and a heavily tangled, huge heap of corruption much larger and more nauseating than even the “Meethotamulla dump”.

The whole State now stands exposed as corrupt and politicised beyond repair. Conversations with high profile criminal investigators, about lapses in the Attorney General’s department and conversations with 60 judicial officers as reported in media, have blown the lid off from an ailing State, raising more questions than answers. IF, as reported, 60 judicial officers had been in conversation with Ranjan Ramanayake, who in fact is at fault? Does it mean all other remaining judicial and investigating officers are clean and independent? One can safely assume, others may have had their own choice in getting politically involved and may be their conversations were not recorded and stored.

It is not just those widely publicised State agencies that is sickeningly corrupt and politicised. Media once again proved their partisan and unethical presence in society. They played a sinister role in defaming and insulting personalities they disliked. In Sri Lanka, “personal privacy” apparently has no legal status and protection and is something media intrudes into in any vulgar manner they wish with applause. It is collective degeneration and decaying of society that was fast tracked in a filthy city centred free market economy during the past 40 years. It has left all professionals including the privileged Administrators corrupt, self-serving and beastly competitive.

Education, public health, public transport and rural infrastructure have all been left aside in this filthy city market economy that caters to the rich and growing urban middle class. It is therefore not just about “Ranjagate”, media and professional degeneration. It is not about much-insulted politicians and the “225” that is loudly called “rotten”. In fact, none in that “225” could rob unless professionals and technocrats provide necessary inputs and support with the filthy rich ganging up. The (in)famous 2015 February Bond scam would not have been possible without them in many places. We have come to a severe crisis point in our post-independent history.

The most important lesson to learn from Ranjagate is that, locking up Ranjan in Welikada or others whose names have been compromised, is no answer. Worst is to call upon the same discredited State organs with no social trust to investigate, prosecute and sit on judgement. President Gotabaya Rajapaksa therefore should read through this chaos to understand, this crisis is not one that can be micro managed by a single person. A State is many layered and is decentralised to all the corners of the country and cannot be handled single handed from Colombo. Making unannounced visits to a State agency or two in and around Colombo, have no impact in rest of the country and in other sectors that have many others linked to their daily functions. This decline, this crisis is beyond managing anyway. 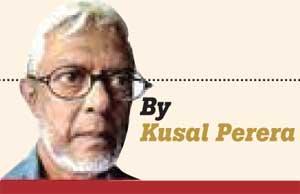 What we need to remember is, every time a regime change was made with personalities, the new “hero” turned out far worse before long than the previous “hero”. JR Jayawardne voted in ’77 with the biggest majority ever in post independent parliamentary history became a publicly ridiculed leader in a few years.

Premadasa who was thereafter elected as the “poor man’s leader” came to be looked upon with disgust and JR then became far better. President Kumaratunge faced the same fate and Premadasa became far better in comparison. Mahinda was no different. Sirisena the same.

Common factor among them all was that they came without any serious development programme to bank themselves on JR’s Constitution and his “free market” economy and failed miserably. It is people who are then left with the same failed project, failed “heroes” and with no answer. Will this regime change teach the people the lesson they keep refusing to learn? Well, Ranjagate opened it and Rajapaksas can walk through if they wish to. But, will they? If they don’t?

We need a social consensus on what type of “development” we need for a satisfied and quality life. We then need a collective social effort in identifying priorities and formulating a “White Paper” on “National Development” in an inclusive, democratic society that certainly would be a disciplined and law-abiding one. To embark on such a social discourse demands an organic leadership outside traditional political parties. Lack of such leadership is what produces “unconventional” leaders, and make “heroes” out of them.

More in this category: « Of mice and men, and a mischief of rats Random Sinhala Buddhist heroes can’t rectify “System” »
back to top

Suranga Lakmal out for the rest of the county season

Ready to take over as PM even today - Sajith

Public reminded to get appointment when applying for passports