To watch Gauri Malar and Roshan Jayathilake playing with their 11-month-old daughter, you'd never guess that just 10 years ago they were mortal enemies.

Gauri, 26, was a child soldier for the separatist Tamil Tigers, fighting what they saw as an oppressive regime propped up by people like Roshan.

"I had not seen Sinhalese or spoken to them," she says. "We thought they were bad people and would kill us."

To Roshan, the rebels were a hated foe whose bombing campaign during a 26-year civil war robbed innocent people of their lives.

"We looked at each other as enemies," the 29-year-old told the BBC's Crossing Divides season, which is about people coming together in a fragmented world. "But now we are happily married. Our daughter is the symbol of our love."

So, what brought about the transformation which means they share dreams of building a house, buying a car and putting their little girl, Senuli Chamalka, through school?

'One of my friends was killed'

Sri Lanka's conflict flared up in 1983, when Tamil separatists - angered by increasing nationalism on the part of the Sinhalese majority - killed 13 soldiers in an ambush.

The incident sparked anti-Tamil riots, in which several hundred of the minority group were killed.

The conflict had been a constant presence in Gauri's life, but changed it irreversibly in January 2009, when she was told a tractor being driven by her beloved elder brother, Subramaniyam Kannan, had been hit by a shell.

It had been fired, she says, from a government-controlled area close to her village in the Tamil Tiger stronghold of Vishwamadu, northern Sri Lanka.

Broken-hearted, she went in search of him but was captured by the rebels. They gave 16-year-old Gauri a week's training and sent her onto the battlefield.

"I saw people shot and killed," says Gauri. "One of my friends was hit by a bomb. We tried to lift her... but she had chewed a cyanide capsule, saying she was so badly hurt it was pointless to survive.

"We had no way to bathe, and no proper food. At times I questioned the purpose of living." 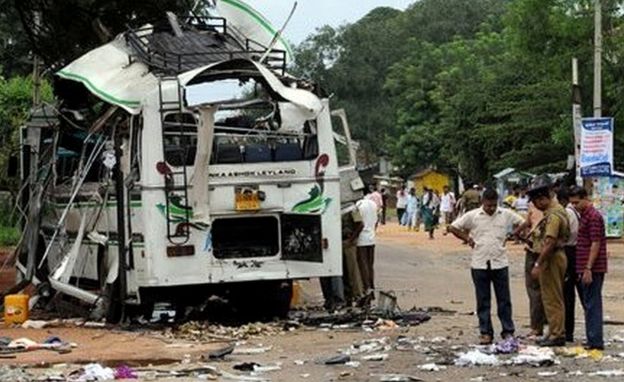 Bus bombings like this one in the central city of Dambulla, prompted Roshan to join the security forces

A rebel bomb interrupted Sinhalese Hindu New Year celebrations in his family's village, in between separatist and government-controlled areas in the Vavuniya district.

Soon afterwards, angry at bombings that killed both civilians and military, he followed his father and several cousins into the Civil Security department.

"Almost every day we heard about attacks," he says, adding that he lost a cousin to the fighting. "People were scared. Families didn't travel together for fear of getting killed."

In 2015, a United Nations report accused both sides of unlawful killings. It said security forces were responsible for crimes including torture and sexual violence, and that the rebels forced both children and adults to fight. 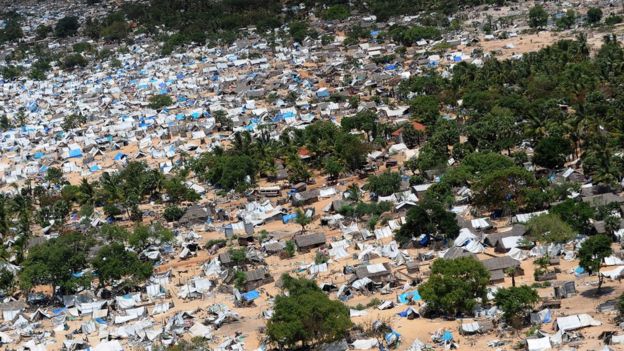 One UN estimate suggested as many as 40,000 people were killed in the closing stages of the war, as separatists made a last stand in the north against the advancing Sri Lankan army

Gauri fought for more than a month before her commanders recognised she had a heart defect and set her free. Soon afterwards, she handed herself in to the Sri Lankan army.

She was among many former rebels sent on a government rehabilitation programme.

Despite having been convinced of the separatist cause, spending time with Sinhalese people helped her realise they were "human beings". She eventually joined the Civil Security department.

The authorities had set up farms to provide for communities in the north and it was on one of these - in Udayankattu - that she met her future husband. 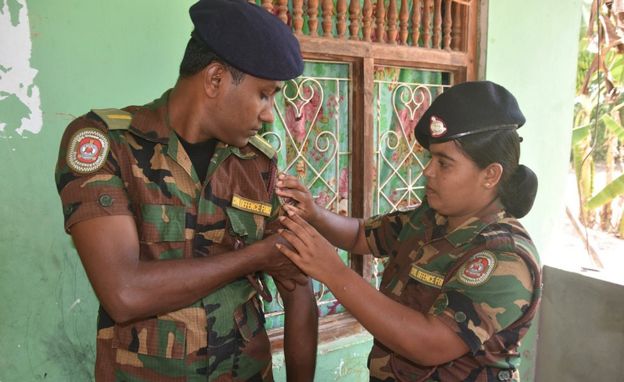 By the time Gauri was posted there, in 2013, Roshan had been there for a year. Unable to communicate with the Tamil-speaking population, he was miserable.

Working with Gauri, who translated for him, transformed his life

"He must have felt alone," says Gauri. "I wanted to make sure he was alright, so I used to bring him home-made food."

Soon, their feelings were clear.

"I told him I loved him more than his mother [did]," she says.

"When I went on leave, she cried," says Roshan. "She even wanted to make sure I had enough money to survive."

On making their relationship public, they were met with prejudice typified by a relative of Roshan commenting: "There are lots of Sinhalese girls... why are you after a Tamil?" 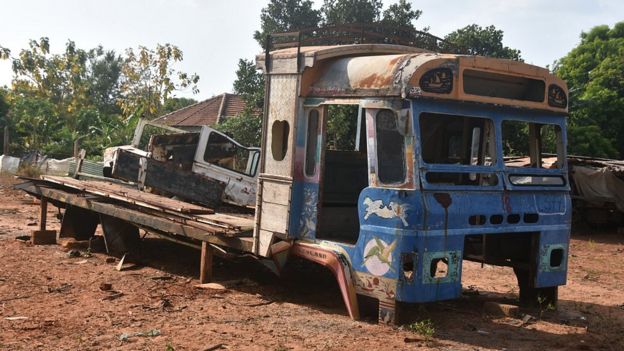 Shells of bombed vehicles are not the only remnants of the war, as the couple found when they encountered prejudice over their relationship

Roshan's mother opposed the marriage, as did Gauri's sister - a former Tamil Tiger - who thought marrying a Sinhalese man would take her away from the community, and that he would beat her.

They say their respective families were won over by seeing how they treated each other with love and respect.

"Eventually things got better," says Gauri, adding that Roshan's mother - who has since died - was delighted with Senuli Chamalka's arrival.

"Our little angel brought us even closer," she says.

These days, the couple live with her family and Gauri says Roshan has become her sister's "favourite brother-in-law".

The pair married in 2014 and take Senuli Chamalka to both Hindu and Buddhist temples. For them, division seemed a thing of the past.

However, in the wake of the Easter Sunday attacks that left more than 250 people dead, and the anti-Muslim retribution that followed, the couple fear a new division could pitch the country back into conflict.

"It is not only people of one side who die in a war," says Gauri. "Many die regardless of their ethnicity or religion.

"We don't need another war."

More in this category: « Lankan power company’s path-breaking foray into Bangladesh Dogs' eyes evolve to appeal to humans »
back to top

Young woman killed in accident in Meemure as bus topples down precipice!

IGP orders those fighting at fuel stations to be videoed!